Aon is a man with many names.

You can call him any of these if you want to – we just call him Aon! (pronounced either “On” or “A-On”)

Aon was born in Bangkok and lived here until he was 12 years old, at which point he moved with his family to Sydney, Australia where he lived for the next 20 years.

Always passionate about art, Aon thrived in the artist and tattooing scene in Australia growing up.

Determined to give himself a solid foundation before making tattooing his career, he decided to go to University to study Graphic Design.

After graduating he worked for several boutique Design Houses while perfecting his craft as a tattoo artist, which he has been doing professionally for 11 years now.

He quickly fell in love with the Japanese style, travelling to Japan multiple times for inspiration and spent a lot of time learning deeply about the style.

Well known on the Australian Tattooing Convention circuit, he has been a feature of countless conventions over the years.

Aon has advanced skills in digital design but there’s nothing he loves more than taking tattoo design right back to its roots. His designs are most often crafted with just pen, paper and imagination.

A true expert and enthusiast of the Japanese tattoo style, he has the ability to put together cohesive, beautiful designs and when combined with his hard earned skills at the art of tattooing, it’s no surprise many customers come back time and again to get more from him.

Just because his Japanese work shines, don’t put Aon in a box, his work in other styles is equally as stunning and his experience and ability to put together beautiful designs really shows.

Outside of work, Aon has a young son and moved back to Bangkok recently to give him the chance to learn the culture and language.

He is a constant source of joy at the studio – happy, positive, calm, helpful and always happy to chat with customers. His English is flawless and his deep exposure to Thai and Australian cultures and the greater art world makes him a man with real depth.

If you’re interested in getting tattooed by Aon, send us a message using one of the contact methods below! 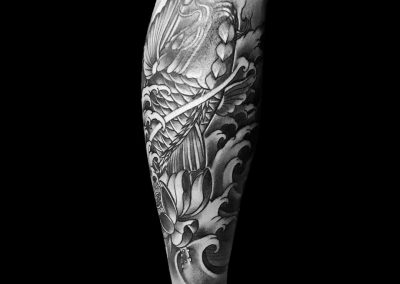