ANYONE looking for a stand-out, superlative tattoo design should consider a Chicano Tattoo.

They really are up there with the most stunning designs on the planet.

And, If your trip around the planet includes a stint of living in, or spending time in Bangkok then please head right on down to the fully licensed ALL DAY Tattoo studio in Sukhumvit, Central Bangkok.

We have Chicano designs that will not only be ultra-stylish, individual and unique, they will blow your mind! 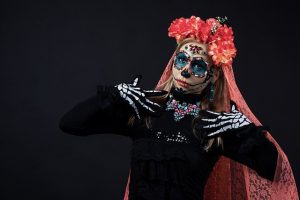 Chicano (male) or Chicana (feminine) was coined to form a derogatory term for a person born in the United States to Mexican parents.

Significant numbers of Mexicans migrated to the U.S. between 1920-1940 and during these years they formed neighborhoods (known as Barrios).

To say the least, living and economic conditions were harsh, but in their own way these communities flourished. This was in spite of rife discrimination in terms of poor housing, low pay, harsh working conditions and police harassment.

This largely unfounded discrimination against those of Mexican descent came from authorities and the American public.

Indeed, it was considered the order of the day.

With such unjust treatment it was inevitable that the resentment on both sides would boil over.

It did in 1943 when serious unrest broke out and resulted in what became known as the Zoot Suit Riots. To emphasize levels of discrimination, over 150 people were injured, some seriously, and more than 500 latinos were arrested.

It is little wonder that so few ‘Americans’ were detained.

The police actually accompanied those servicemen and civilians in attacks on the latino community.

They were certainly there, but had orders from above not to arrest any of their ‘own’.

It is also a fact that some of the police joined in the rioting! Rather than dwell here on the oppressive nature of discrimination towards Chicanos and Mexican Americans we feel it is appropriate to touch on the lifestyle of these proud people.

The Barrios certainly had their own individual culture and style.

This was shown in dress, music and art.

Huge wall murals depicting scenes of ‘real’ life, both political and familial added color and meaning to these neighborhoods.

Out of this culture Chicano tattoo art steadily increased in popularity.

By the 1960’s the ‘Chicano movement’ was gathering momentum and what was once seen as a derogatory term became a symbol of pride.

This powerful movement became a political and cultural uprising that was based on non-violence.

Artistic creativity was the weapon used to fight political and social discrimination against the Chicano community. 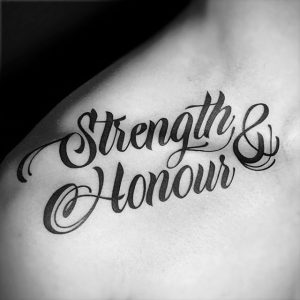 The term Pachuco (male) and Pachuca (female) was introduced in the 1940’s and relates to a subculture of Chicanos and Mexican-Americans who associated themselves with zoot suits, nightlife, flamboyant public behavior and street gangs.

The adoption of the Chicano art movement became a culture in which Chicano tattoo engravings showed allegiance and support for a particular street gang.

Jailed gang members were nothing if not resourceful!

Prison was not the easiest place to acquire decent tattoo equipment.

This meant designs had to be engraved using such tools as needles, wire and black ink from ballpoint pens. 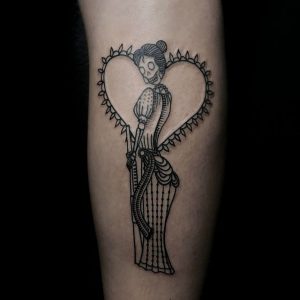 Chicano tattoos are now accepted the world over 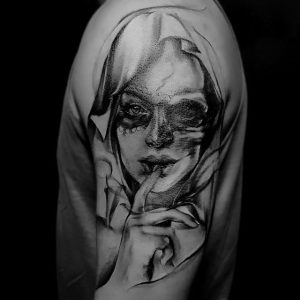 While Chicano and Mexican-Americans still continue with their strong beliefs and cultural associations, the quality and style of Chicano tattoo art has lead to it being introduced into mainstream tattoo art.

You do not need to have proud Mexican blood in your veins, you do not need to be a member of a street gang, and it is not mandatory to have been in prison to receive a highly individual Chicano tattoo.

It is extremely refreshing to know that men and women of many different nationalities and religions are taking increasing notice of these highly stylistic tattoo designs.

What do Chicano tattoos represent? A major plus of Chicano designs are that they are suitable for both guys and girls.

Chicano tattoos were originally inspired by real-life experiences and instances.

They really are stunning designs of emotion that can have deep, significant meanings.

This means that having a Chicano design inked is unique and very personal to the wearer, no matter your gender.

Traditionally are Chicano tattoos were black and grey and mainly consisting of bold images and patterns. These meanings can relate to love of another person, one’s family, a personal life event or a deep-felt belief.

They can be any size and inked on any part of your body.

These days as tattoo techniques and styles have progressed, many “neotraditional” designs and themes are becoming popular in Chicano style, with bright, bold colors bringing a new dimension to the designs. Opting to have a Chicano tattoo should please a professional, highly skilled tattoo artist.

This type of tattoo gives them free reign to depict exactly what you are looking for.

The finished article should show highly individualistic images drawn from any area of life.

A well-delivered Chicano tattoo design represents many things. This includes: If you are one of the growing number of tattoo lovers who are into badass designs then a Chicano tattoo is most certainly for you. 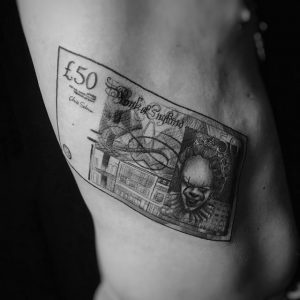 The uniqueness of a Chicano tattoo cannot be underestimated. 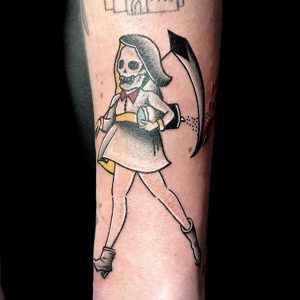 Each design tells its own story and its meaning will always be special to the wearer.

You choose what you want depicting on your skin, what size and where you want it placed. Your tattoo artist will do the rest!

In Bangkok & looking for the perfect Chicano tattoo? Those who are spending time in Bangkok and are looking for the ultimate Chicano tattoo have the perfect place to go.

We will deliver your desired design exactly as you want it and ensure it is perfectly placed.

The choice of Chicano design is so wide and varied that we find our clients often need help and advice on what Chicano inking will best fit them.

Rest assured, our fluent English speaking team of managers and artists are ready to assist.

We will give advice based on what you are looking for, not on what is the easiest, largest, most expensive tattoo design.

A major part of our tattooing philosophy is to ensure you are 100% comfortable before any tattoo work commences. 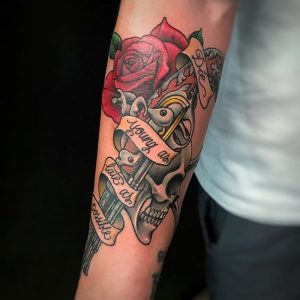 Our team will never pressure you into anything.

The art of Chicano tattooing is one of our favorites.

We feel perfectly placed to inspire and complete a design you will be proud to wear.

A “Peace of mind” policy to put your mind at ease

As the #1 fully licensed tattoo studio in Bangkok it will hugely benefit you to make us your ‘go-to’ tattoo studio when spending time in ‘The City of Angels’.

The ALL DAY tattoo studio team does not say this lightly.

Hard work, professionalism, highly talented artists, the fact that fluent English is spoken and our desire to please are shown through the ALL DAY Tattoo studio peace of mind policy.

This charter is in place to ensure the safety of all clients and staff.

Hygiene standards are unmatched, we only ever use highest quality imported USA inks and industry-best, one use needles.

When it comes to aftercare procedures and instructions we make sure these are a significant part of your tattooing experience.

If you are looking for an original, ultra-stylish Chicano tattoo while in Bangkok there really is only one port of call: The ALL DAY Tattoo studio.

For a no-obligation chat to understand exactly why we are the Bangkok tattoo studio to visit, please do not hesitate to contact us using the most convenient method below.