For centuries, ravens have been a harbinger of omens both good and bad 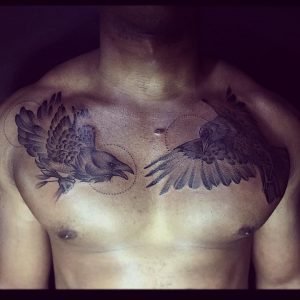 In Greek mythology, the raven was associated with Apollo “God of Prophecy”

When the raven returned with news of Coronis and her unfaithfulness, Apollo was so enraged that he scorched the raven’s feathers turning them black In mythology, the raven has also been associated with the Greek word (pyschopompos) which means “guide of souls”

Ravens have been known to be a guide for lost souls, leading them from Earth to their place in the afterlife

With their magical abilities, they can travel the underworld carrying messages from deceased loved ones to the land of the living

In Native American culture, the raven had the power to extract secrets from the shadowlands

As powerful totems they were symbolic in many different forms, sometimes representing the change in consciousness, and other times they could symbolize the ability to shape shift

In many cultures, ravens were common familiars of mages, witches, and warlocks because of their oracular qualities In the Japanese culture, the raven does not have a dark or evil meaning

Instead it is a symbol of protection, future, light, and inner self

It is believed that a raven led Emperor Jimmu to Nara, which eventually became the land of his empire

Ravens are frequently found throughout Japan in Shinto shrines

What is the Meaning of a Raven Tattoo?

Raven tattoos are full of symbolism and meaning, but it is up to you to decide what they personally signify for you

They can be found most often feeding on dead and decaying matter, hence why they are a symbol of diabolical evil 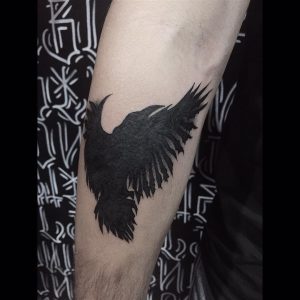 Some other negative meanings of the raven are:

Because of their high intelligence they are also very hard to outsmart, trick, or trap

These birds can be a sign of transformation, a symbol of rebirth and the afterlife

Ravens have a deeply spiritual connotation, and can be seen as a manifestation of your spirit guide helping to align your physical, emotional, and spiritual self

Other positive meanings for the raven are:

Because of their many symbolic meanings, they can work well as a tattoo design whether it is a stand alone design or an addition to a current design

At ALL DAY tattoo studio, our artists are experts at any tattoo style and can produce anything that your heart desires!

Here are some of the most popular styles for raven tattoos:

If you are unsure of what style best suits you and have an idea for your design but don’t quite know how to bring it all together, then the ALL DAY Tattoo team of Managers and artists can assist you with a free consultation

Best Placement and Design for a Raven Tattoo

For minimal designs, we tend to have a lot of clients who like to place them on the wrist, ankle, or collar bone Ravens are full of symbolism and can be incorporated into a sleeve or larger piece, as well as being a focal piece all of its own

Whatever design style you choose to go with or the meaning that is significant to you, a raven tattoo can only be as good as the artist you choose to bring it to life!

ALL DAY Tattoo studio located in the Sukhumvit area of Bangkok, is a fully licensed studio with 14 artists who can cover any tattoo style or design you could possibly dream of 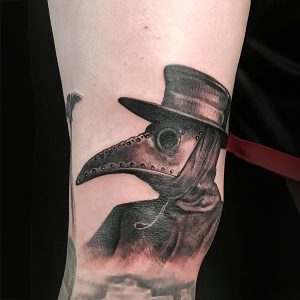 Why ALL DAY Tattoo is Bangkok’s best choice for your raven tattoo?

Tattooing is not just our livelihood, it is our passion!

Once you step inside and experience the vibe for yourself, you will see how passionate we are about tattooing and everything that goes along with it from start to finish

At the end of your journey with us you will no longer be a client but part of the ALL DAY tattoo family!

We are easily accessible, in the heart of Bangkok located in the Sukhumvit area

Let us add you to our list of satisfied clients who are now part of our ALL DAY family!