Receiving a stunningly vivid Samurai tattoo is certainly not for the faint-hearted.

However, those who are ready to have such a bright, bold and totally authentic design tattooed while in Bangkok the centrally located ALL DAY Tattoo studio is the place to go.

First we will dig a little into the Samurai legend and why this seemingly ferocious, yet intricate tattoo design interests so many.

From there we will tell you exactly why opting for the #1 fully licensed tattoo studio in Bangkok is the best choice for a stunning Samurai inking experience.

What is a Samurai? 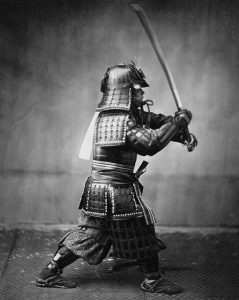 In ancient Japan, Samurai warriors were held in great esteem.

They were considered noble warriors whose mission in life was to serve and protect those of higher rank in society.

Due to their immense fighting skills, unbounded bravery and unquestionable loyalty, Samurai warriors were revered and respected.

They prescribed to a way of living which was based on loyal service and honor.

Their beliefs were based on Zen Buddhism.

Through such a focus they were able to remain calm of mind while being fully focussed on their duties of protecting at all costs.

A Samurai warrior was immensely fierce, showed no quarter in battle and was prepared to die for those they protected.

Even so, there was a very calm aspect of their lives which involved frequent meditative sessions.

This peace and clarity of mind allowed them to focus on their duties and unbending loyalty.

Samurais are born to protect but not to harm needlessly

For anyone considering a stunning Samurai tattoo design there are some very valid reasons as to why this depiction is worthy of its place in today’s modern world.

The pride and self-discipline of a Samurai shows dedication in terms of focus and protection of loved ones.

Samurai’s followed “Bushido”. This was based around the principles of:

While Samurai were trained and highly skilled in all forms of fighting disciplines in order to protect, they would shun unnecessary slaying.

The depiction of a Samurai tattoo on your body can be assimilated in today’s world as having:

There is no doubt that the majority of Samurai tattoos are inked on men.

This is due to the often fierce, graphic and detailed depictions available and the fact that Samurai tattoos are usually larger by design BUT, there are some fantastic smaller, gentler Samurai designs that fit girls perfectly.

It is important to understand that not all Samurai tattoo designs need to be fierce or frightening.

There are some excellent image choices where the Samurai is at peace with the world whilst meditating.

One other thing to take from the ancient Samurai tradition and convert into today’s modern meaning:

Marriage was part of a Samurai’s culture. Through marriage a woman also became a Samurai and gladly accepted to live by the same code of conduct. Any children born also followed in their parent’s footsteps. 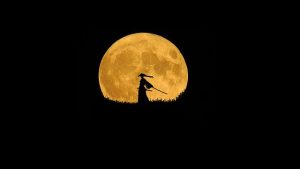 Today, those couples who are married or have a long-term relationship could have different Samurai tattoos inked at the same time.

This would produce a very special bond between them while looking individually stunning.

Your reasons behind such a stunning ‘pair’ of tattoos would very much relate to the Samurai belief – Live life to the fullest & make each moment count as if it were your last one – Coupled with the traits a Samurai lived by this really is a fitting tribute to each other!

It’s not just about the warrior

If you’re thinking of getting a samurai tattoo, adding other elements to the design can add even more depth.

By doing so you will receive a highly intricate, interesting and very ‘real’ tattoo.

In this respect, think about adding such things as:

Add some words or a saying to your Samurai tattoo

Along with the Samurai and special feature(s) of your choice it is worth considering the addition of a special word or saying.

This can be completed in Kanji characters (Japanese writing using Chinese characters) and really can finish off your inking in style.

It’s important to note that if you’re thinking of adding text in a language that isn’t English or Thai, we can’t make 100% sure they’re correct so it’s best to make sure you find a reputable source. 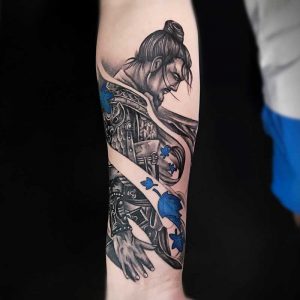 As has already been mentioned, a good quality Samurai tattoo will include intricate, fine detail.

This makes it a tattoo design lending itself to a highly skilled tattoo artist.

Well-delivered Samurai tattoos are far more complex than may be imagined.

Due to the painstaking detail and design such tattoos generally lend themselves to covering larger body areas than normal.

4 places to consider a perfect Samurai tattoo are:

Make sure you choose a reputable studio for your Samurai tattoo

Whatever tattoo design you are after it is highly important to use a studio with experienced artists – In the case of such an intricate Samurai tattoo design it is absolutely crucial!

When considering a Samurai tattoo while in Bangkok you should do your homework before committing. With this in mind, here are:

10 important considerations to tick off when deciding which is the best tattoo studio for your inking:

You do not want to be spending a long time getting to/from the studio of your choice.

Use of the BTS (Bangkok SkyTrain) system is a highly efficient way of getting around town.

To learn more about what our friendly, professional and highly artistic team can do for you when it comes to realistic, highly detailed, intricate Samurai tattoo designs please get in touch using one of the contact methods below.